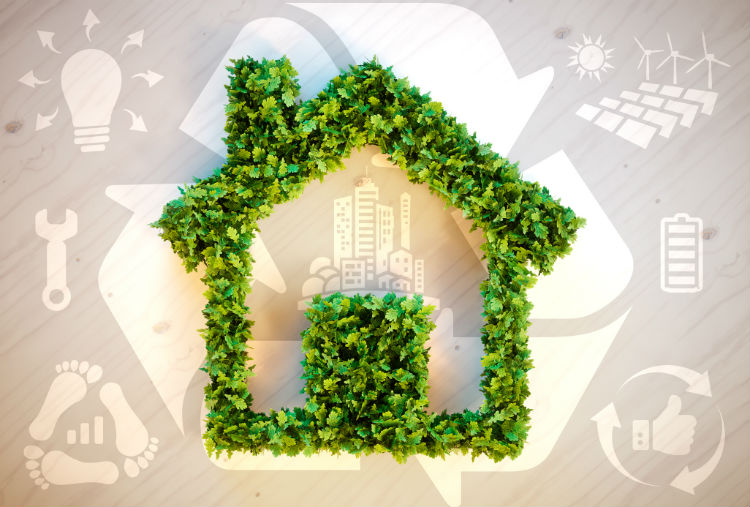 The desire to reduce human impacts on the environment has risen considerably in recent years, with the devastating effects of uncontrolled expansion being increasingly documented.

Living sustainably and reducing energy waste is a small but important part of reversing this environmental damage.

Designers have subsequently been hard at work maximising the efficiency of energy-saving innovations, so in this article we’ll be looking at some of the top trends for eco-friendly homes…

On a very basic level, homes can be made more energy efficient simply by considering their layout.

A south-facing home will be warmed and lit by the sun for most of the day, compared to a cooler north-facing one – so you may require less heating.

If you’re worried about sun glare, planting trees or shrubs on the south side of a house can prevent this during summer, while the autumnal shedding will let more sunlight through during winter.

Wash away worries about waste Another unexciting but practical method to increase efficiency is to install a rainwater harvester on the roof, which stores non-drinking water for when it’s needed.

Older systems were relatively primitive, but modern harvesters are slick, integrated devices that can be added to existing gutter systems.

Another water-waste reducer is the dual-flush system, which supplies small or large amounts of water to toilets, depending on how much is required.

As well as reducing the water bill, this simple solution can also reduce wasted water by around 5,000 litres a year, based on some estimates.

It pays to be smart with energy Automation in the home is becoming increasingly popular, whether it’s a home assistant, a smart boiler or a smart thermostat.

These technologies can ‘talk’ to each other to boost energy efficiency, with some devices being able to replicate or improve on usual energy use patterns.

As an example, a smart thermostat can communicate with a smart boiler and deactivate when nobody’s home.

Home assistants can be used to access multiple energy-saving systems at once, making it easy to shut everything down when you leave the house.

The overlap of devices which can communicate with each other is constantly expanding, so energy saving smart-tech is only likely to become more prominent during 2018.

The future of green energy – plants and pods?

When it comes to future energy saving technologies, there are countless bold ideas in the pipeline that could one day be lighting our homes and powering our devices.

Not content with having plants trap carbon dioxide, researchers at the Massachusetts Institute of Technology (MIT) are now looking at using them to emit light in homes.

This is done via nanoparticles absorbed into plant cells, which cause the plants themselves to produce light.

Before you rush out to stock up on succulents, however, it’s worth noting that the technology is in the earliest of stages, producing only a faint glow for a few hours.

‘Our work very seriously opens up the doorway to streetlamps that are nothing but treated trees, and to indirect lighting around homes’.

Moving from using green energy to producing it, rivers have become the latest focus for those looking to produce clean energy for future generations.

Generating hydroelectricity isn’t new, but tapping into constantly flowing rivers is a new avenue of exploration.

Current technology is mainly limited to river-blocking dams, which generate electricity but also disrupt the environment.

In South Carolina in the United States, innovators at Verterra Energy are looking at putting ‘V-Pods’ into the water, which will hopefully produce electricity without any disruption.

The pods rest on the riverbed and constantly generate energy from the flow of the river, and are set to enter testing in early 2018.

Talking up the technological benefits of this type of energy production, Verterra Founder Ted Christopher said;

‘Hydro can be incredibly transformative and impactful. It will allow local economies to develop and increase their quality of life’.

There are small and not-so-small changes you can make to improve energy efficiency wherever you live, and future innovations will bring even more ways to lower bills and protect the environment – so watch this space!