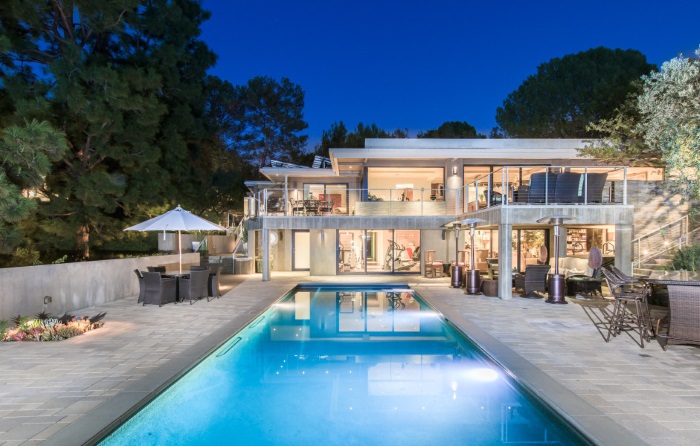 Jane Fonda, actress and fitness guru, is selling her home in Beverly Hills for $12,999,000. She and music producer Richard Perry have put their home on the market.

The pair have been together for eight years but never married. Fonda was previously married to Roger Vadim, Tom Hayden and Ted Turner. Fonda, 79, found fame in memorable movies including Barbarella in the Sixties, On Golden Pond and Monster in Law. She’s currently starring in Netflix hit, Frankie and Grace, with Lily Tomlin and Martin Sheen.

The eco-home on Carla Ridge was built in 1961 but has been completely renovated since the pair bought it in 2012. It has a stylish open-plan interior with huge picture windows and terraces overlooking LA. There are four bedrooms and a glass elevator serving the different levels. The updated kitchen has an over-size island and bi-folding door to the terrace. There’s even a fireplace built into the window of the breakfast area, so you can get the views without the chill.
The 150 guests at Fonda’s 75th birthday were accommodated easily in the house’s roomy reception spaces. “We could’ve had another 50,” she said. The master suite comes with a sitting room, his-and-her bathrooms and an enormous walk-in closet. “It’s the first time I have had a closet you can walk in and see everything you have,” explained Fonda.
Perry has his own den downstairs lined with gold and platinum records that he’s made over the years with stars such as Barbra Streisand, Diana Ross, Carly Simon, Rod Stewart, Art Garfunkel and Ringo Starr. There’s also a cinema room, a gym and a solar-heated outdoor pool. Fonda has created a meditation garden in the three quarters of an acre grounds, and there’s a viewing area with a fire pit, overlooking the canyon to the Pacific Ocean. “Whoever ends up with it,” said Fonda, “I hope you’ll love it as much as we have.”