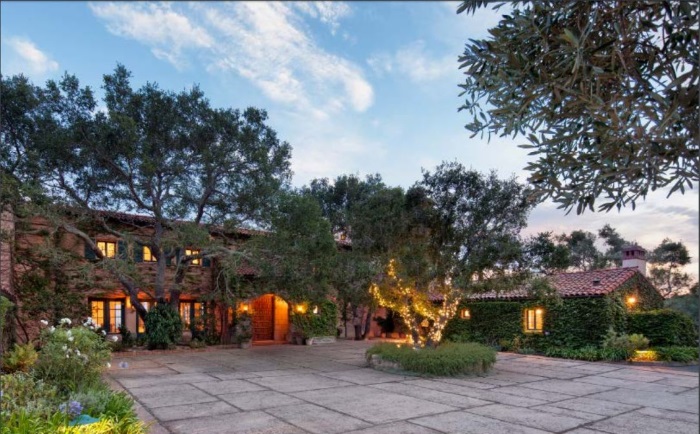 Bag yourself a Christmas bargain with this fabulous Californian estate belonging to Jeff Bridges. The actor and musician isn’t messing around – he’s dropped the original asking price of the Villa Santa Lucia by more than $10m.

Now listed for $18.5m, this beautiful villa comes with nearly 20 acres of land and magnificent views across the sparkling Pacific to the Anacapa islands.

Bridges, who has starred in numerous films including: Tron, Starman, K-Pax, Jagged Edge, True Grit and Surf’s Up, bought the Santa Barbara house in 1994. He and his wife, Susan, brought their three daughters up here and are selling now as the girls have left home. They are not entirely deserting the area: they have bought a smaller property nearby, although they also own a ranch in Montana.

The Tuscan-style villa was architect-designed and built in 1988. The Bridges bought it from songwriter Kenny Loggins, who is famous for many film soundtracks, including Danger Zone in Top Gun.

You meander along a drive that crosses a small brook and enter the property through a huge and heavily carved oak door. Inside, the décor is calm and light, balanced with rustic beams and heavy stone pillars. Light floods in through tall arched windows, better than pictures, framing the glittering Pacific.

There are five sumptuous bedrooms and a tower room, which the star of The Big Lebowski uses for his meditations. But it’s what lies outside that will eternally attract you to this charming home. The gardens are glorious – a riot of colour and form – all the time outperformed by the backdrop of the deep blue, diamond-glinting ocean.

Life Montecito-style blurs the boundaries between indoors and outside. This home offers a dining terrace, a loggia, a raised deck, balconies and patios. You can amble down steps through swathes of bougainvillea and roses, to the natural-looking pond-shaped swimming pool. Surrounded by manicured lawns, a waterfall cascades into it and plants grow down to the water’s edge.

This is not everything, though. There are two secluded guest houses, staff accommodation and a dedicated studio with a home theatre. For the children, there’s a perfect playhouse, reached by its own bridge, and a meadow ideal for outdoor games.

Bridges has said that his favourite part is the “fort” – the rooftop terrace of the tower – where he escapes to. But he is also very fond of his collection of aloe trees. If you are thinking of branching out, then this is a home that is perfect in many ways.

The property is on the market for $18.5m through Suzanne Perkins. For more details, visit www.suzanneperkins.com