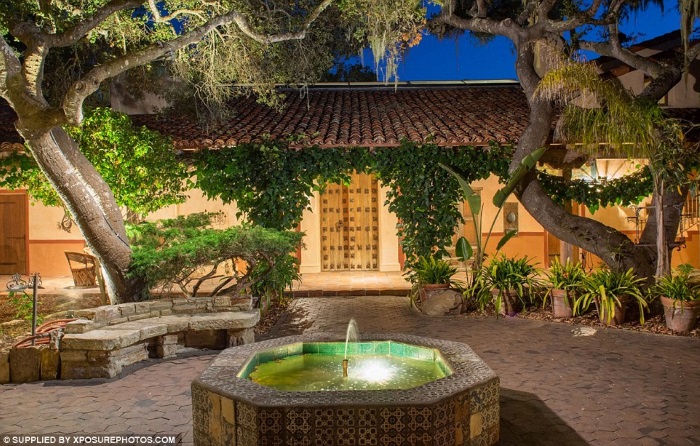 “Go ahead, make my day”. When Clint Eastwood uttered those much parodied words in 1983, he was playing Dirty Harry in Sudden Impact. And he’s likely to say them again if you consider buying his Californian house. It’s on the market for $9.75m.

The Spanish Colonial-style villa is known as Hacienda Este Madera, which translates as “east wood estate”. The 86-year-old actor bought “Pebble Beach” in 1994 and owns several other properties in the Monterey area, including a new hilltop villa he’s had built to his own design. He owns the Tehama Golf Club where it is located, and has a share in the Pebble Beach golf course.

His Californian property dates back to 1928. It has 4.7 acres of wooded grounds as well as sea views across Carmel Bay. With his second wife Dina, the actor hosted A-list- dinner parties in these very rooms, according to the listing with Sotheby’s International. He and Dina raised a daughter, Morgan, who is now 20. Clint is currently dating Christina Sandera. Clint first fell in love with the area in the early 1950s when he was posted to Fort Ord by the US Army. He was even mayor of nearby Carmel in 1986-88. The town’s by-laws include a ban on high heels and street addresses – it’s considered bad luck to change the name of a house there. Clint managed to repeal one law during his term in charge – so you are now allowed to buy and eat ice cream in the street.

He’s not slowing down in his old age. Having recently directed the Tom Hanks film, Sully, he is now producing a remake of A Star is Born, featuring Lady Gaga and Bradley Cooper.

There’s bound to be plenty of interest in this attractive property. It has a master bedroom complete with bathroom, two dressing rooms, a gym and a study. There are four guest suites built around an open-air courtyard with shady trees and a central fountain. The living areas continue the Spanish theme, with heavily carved wood, Moorish decoration, tiled floors and heavy stone fireplaces. But the question is, do you feel lucky?