Branching out: meet the house of the future 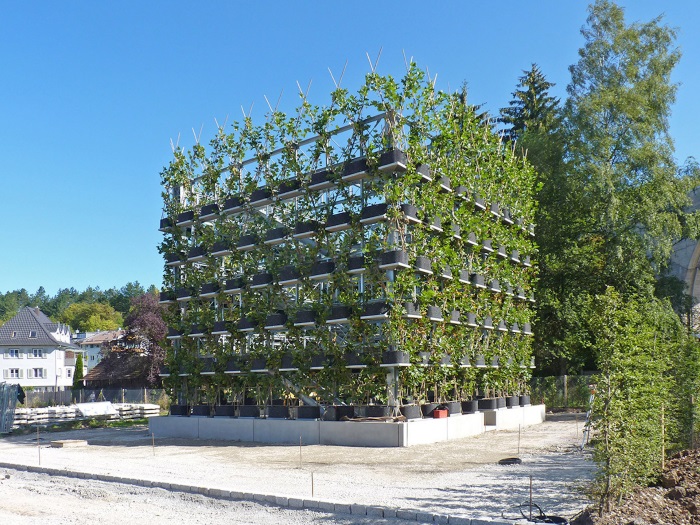 Trees are good for us. They boost our health and well-being, a fact that has been documented scientifically many times over. They clean the air and cool our cities. And tree-lined avenues can push up property values by as much as 15%. A good place to put down roots, then.

Some people take things a step further and live in a tree house. Are they barking? Maybe not. For our very survival, we have to co-exist with nature and also seek to preserve it.
One German architect has twigged that trees are the key. Ferdinand Ludwig (www.ferdinandludwig.com) is growing his own buildings. Just as you can build a sturdy boundary by laying or pleaching a hedge, Ludwig is intertwining trees to create a living façade.

As the trees grow around a framework of metal scaffolding, their limbs grow together. The practice of Baubotanik, or living plant constructions, takes time. Ludwig’s largest project, Platanen-kubus, is made up of 1,000 plane trees and it won’t be fully grown until 2028. “We developed solutions to adapt to climate change by using the potential of Baubotanik,” said Ludwig.

The front of the building will eventually be a green wall like a forest. Inside, a wide ramp leads visitors upwards into the canopy of branches. Ludwig created the concept for a competition in Berlin to design a House of the Future. His idea was to start a building that itself had an uncertain future – because its final appearance cannot be predicted exactly.

He chose plane trees, which are commonly found in city streets because they cope well with soil compaction, pollutants and other urban pressures. Ludwig has previously used willow to create a footbridge and a living tower.

“In the urban space, Baubotanik can make great contributions because the tree structures have a high evaporation performance and water can thus be productively used for the cooling of buildings and the city,” said Ludwig. “We think our approach provides new possibilities, which ‘take root’ in architecture and open-space design in the medium and long term.”

“I came in touch with some historic examples of living architecture while I was studying at the University of Stuttgart and was fascinated from the first moment on,” he added.

Living architecture can help combat soil erosion while providing oxygen, sustenance, shelter and habitation. It can also help mitigate climate change. Working together with nature, this innovative design concept could even help save our lives in the longer term.