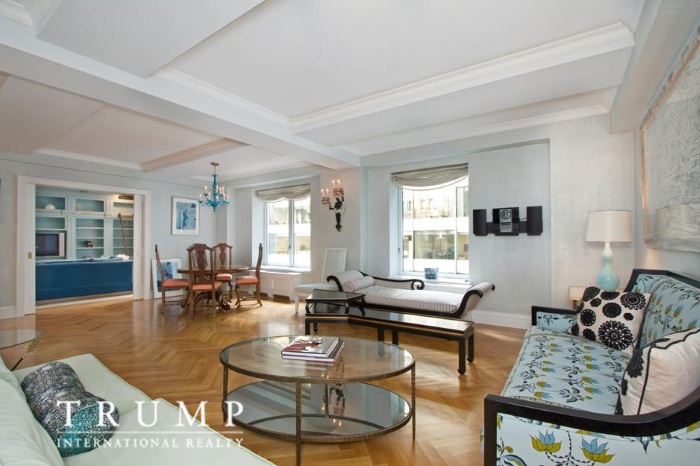 Soon-to-be First Daughter, Ivanka Trump, may be following her father to Washington DC. She’s put one of her New York apartments on the market and is said to have recently bought a house in the capital.

Offspring of Donald and his first wife, Ivana, Ivanka is married to Jared Kushner, and the couple have three children. They also own a four-bedroom penthouse in the Park Avenue block, so they won’t be leaving New York City entirely. Jared is a businessman with property and newspaper interests, and he led Donald Trump’s online presidential campaign. This week, Jared Kushner was named as a Senior Advisor in the new Trump administration.

The apartment they are selling is a two-bedroom, two bathroom property at 502 Park Avenue. It’s on the market for $4.1m. It has a spacious living room with large windows and parquet flooring and the block has a resident manager, on-site gym and housekeeping services.

The 32-storey block was built in 1929 and was initially known as the Viceroy Hotel. It became the Cromwell Arms and then the Hotel Delmonico until Donald Tump converted it into 120 exclusive apartments in 2002.

Sitting at the corner of 59th Street and Park Avenue, its location is one of the most expensive residential neighbourhoods in the world. Donald paid $115m for it in 2002, beating three other bidders. The handsome period building retains many of its historic interior detailing. The communal areas are grand, with wood panelling and marble flooring. Despite its history, the building offers 21st century living, with ultra-modern kitchen appliances, thermostat-controlled heat and air conditioning, plus contemporary lighting and sound systems.

Professional staff, such as a doorman, concierge and maid service mean it’s more like a hotel than a block of flats. A garage and valet parking makes getting around this busy city much easier. But, of course, being right at the heart of the Big Apple, in Manhattan’s Upper East Side, you have the world at your fingertips. Central Park is just a block away and the swanky shops of Fifth Avenue are right around the corner.

Ivanka bought the unit more than 10 years ago, paying a reported $1.52m for it in 2004. Now 35, as a businesswoman, model and mother of three, it’s time to sell her starter apartment. Ivanka Trump’s property is for sale through Trump International Realty (https://www.trumpinternationalrealty.com/listings/502-park-avenue-new-york-trmp1623078/).