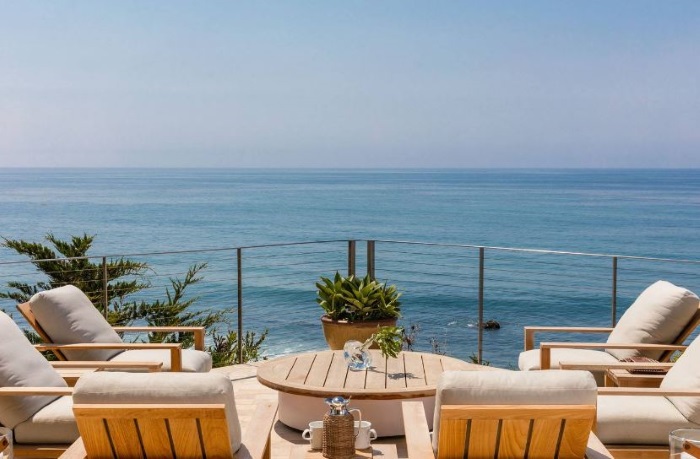 Live like the stars! Supermodel Cindy Crawford and her husband Rande Gerber are selling their ocean-front home in Malibu’s Encinal Bluffs. A cool $60m will secure their perfectly presented four-bedroom property and you can even keep Cindy’s carefully chosen furniture for an undisclosed additional sum.

If Malibu is the Hamptons of the West, Encinal Bluffs is the East Hampton of Malibu. It has counted Brad Pitt, Julia Roberts and Ellen DeGeneres among its residents. The Gerber house is perched on a rocky bluff, surrounded by pristine lawns and has a private path down to the beach. The coastline here is popular with divers and surfers, the beach is sandy and the sea is warm.

Cindy and Rande have proved to be a golden couple. They have been married for 18 years and have two children, Kaia, 15 and Presley, 17, who are following in their footsteps (Rande was a model, too). Presley features in a new Dolce and Gabbana campaign, along with the offspring of several other famous people, including Jude Law’s son Rafferty, Pamela Anderson’s son Brandon and Daniel Day-Lewis’s son Gabriel. Last summer, Kaia was named the face of Marc Jacobs.

Rande co-owns Casamigos Tequila with George Clooney and the business partners have recently sold adjoining holiday homes in Mexico, to buy condos in the same luxury block in Manhattan.

Cindy and Rande bought the Encinal Bluffs house two years ago, because they own the estate next door. In selling it on, they have liberated part of the land that came with it to enlarge their own property. Even so, this house comes with just over three acres, complete with a tennis court, fire pit, swimming pool and a three-car garage.

The two-storey house is bright and white with floor-to-ceiling windows giving a view of the whole coastline. Cindy and Rande have renovated throughout, bringing the 1940s built property right up to date. There are four bedrooms in the main house and a vast, open-plan living area. The master suite has sea views, a sitting area, a fireplace, his and hers spa baths and a dressing closet. There are two other guest suites and a fourth bedroom, currently being used as a media room. A separate guest annexe has its own kitchen and sitting room.

Imagine relaxing on your wrap-around deck, looking out to the shimmering sea, with no distractions. At least you can be sure the neighbours won’t be popping round for a cup of sugar. Something trendier, maybe.