What types of property can you choose from in Canada? 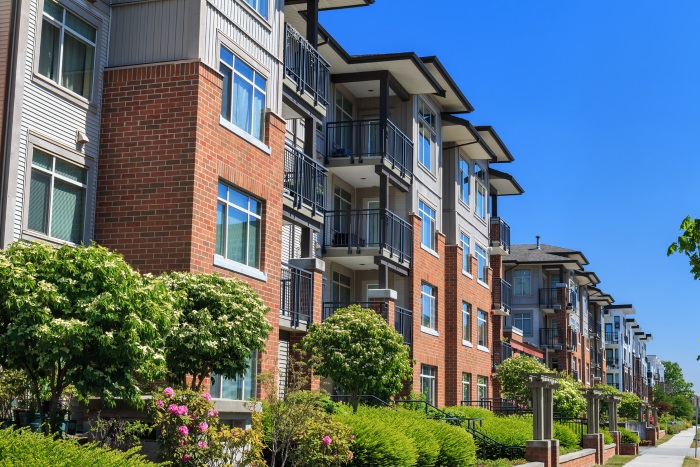 Canada is a popular nation with expats, filled with breath-taking landscapes, friendly locals and great opportunities.

The Canadian property market is a similarly diverse area, with the country offering much more than log cabins in the woods and skyscraper apartments.

In this article, we’ll be taking a look at some of the varied housing options on offer in Canada and how they compare to UK residences.

At the smaller end of the scale, we have the apartment. As with flats in the UK, these can vary in size, from one room domiciles to multi-bedroom affairs. If the apartment is in a dedicated building with other apartments, it’s usually managed by a landlord but maintained by a superintendent (‘super’) who lives in the same building.

In apartment terminology, a ‘lowrise’ is a building under six stories, which rarely has an elevator. From 6-30 stories, however, the building is known as a ‘highrise’ and typically contains at least one elevator.

An extension of the apartment is the condominium, or ‘condo’. Structurally speaking, this is the same as an apartment, but it can be rented from the condo owner, instead of a landlord. This personalises the situation as you might be renting a condo that the owner still uses at certain times of the year, and the place could feature their own decorative touches.

Condos are sometimes more involved than apartments, as residents can band together to form a ‘corporation’ that acts in the interests of all the building’s residents. Their meetings range from discussing rental policies for non-members, to topics like whether pets are allowed.

Some inner city areas of the UK are known for their rows upon rows of terraced houses, Canadian cities have their own version of this – the townhouse.

Townhouses are typically joined to other townhouses, but can be considerably ‘grander’ than the usual terraced home.

They are usually 2-3 stories tall and generally wider than the average UK terraced home. As with UK terraced houses, townhouses generally open right onto the street, although they can have a small rear garden.

In the interests of making the most of available housing, some townhouses are split into smaller individual units, causing them to function as miniature apartments.

The townhouse idea is extended with the ‘duplex’ and the ‘triplex’. Essentially, these are what is known as a semi-detached in the UK, where what would normally be one house is split into two down the middle.

It isn’t unusual for someone to buy ‘both’ houses and then live in one half, while renting out the other.

The triplex is just an extension of the duplex, covering three properties on the same site instead of two. As well as being horizontal houses connected to one another, duplexes and triplexes can also be a vertical block of apartments.

The idea of the duplex and triplex can go even further than three, where whole rows of houses are rented out.

Moving away from the hustle and bustle of the city, there are also bungalows and cottages available for purchase on the Canadian property market.

Bungalows are on a par with those seen in the UK, being single family residences consisting of one floor.

The layout of bungalows can differ, with bedrooms potentially being found at the back of the house or located on one side of the building, opposite living rooms and kitchens. It is possible for a bungalow to have a basement, but this isn’t the norm.

The Canadian cottage is quite different from its UK counterpart, as it can sometimes be quite a lot larger than you might expect. As Canadian cottages are sometimes made of wood and can be located in rural areas, they can more closely resemble what we would call cabins.

Broadly speaking, planning restrictions mean that rural homes are often resales, but highrises are frequently springing up in Canada’s cities.

We hope that you’ve found this look at the types of property available in Canada useful. If you’re considering a move to the country then keep an eye on the Everything Overseas blog for more news about Canada and the nation’s property market.