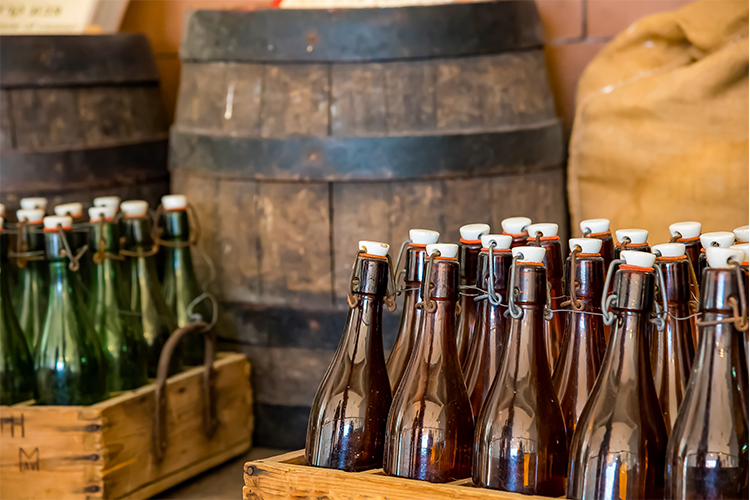 Yes, you read the headline correctly. When people think of Spain and alcoholic drinks they could be forgiven for thinking wine or perhaps sherry. And it’s true that, for most, beer in Spain is something yellow and fizzy that is best quaffed in quantity beneath the sweltering sun.

But you might be surprised to learn that Spain is getting a little more creative with its ales and has a nascent craft beer industry that is beginning to attract worldwide attention.  Below we’ve listed five uniquely Spanish beers that you might want to try on your next trip.

So, in no particular order … and without a bottle of San Miguel or Cruzcampo in sight:

Brewed in Granada, Alhambra Reserva Roja is a darkish red beer with an off-white head. Said to be somewhat fruity and with caramel-like aromas, ale enthusiasts rate this beer highly. If you fancy trying it there can be no better place to do so in the shadow of the Alhambra palace itself, preferably on a sunny winter’s day with the vista of the snow-capped Sierra Nevada mountains in the distance.

Incidentally, “Alhambra” in Arabic means “the red (fort)” and its walls are coloured an orangey red … just like the beer. Coincidence?

Heading north to the Basque Country, Basqueland AUPA (which stands for All United Pale Ale) is a craft beer with a difference. Brewed with pride in Hernani by the fiercely independent peoples of this culturally distinct enclave, the light and hazy beer is lemony in character with notes of earth. There is even, so it is claimed, a hint of artisanal bread in there due to the dry hopping technique used in its creation.

Did you know … “aupa!” is a common salutation in Basque, meaning “cheers!”

Espiga ale has a story behind it. Two Spanish biologists set out to create the perfect ale, journeying to Denmark and Germany to study traditional brewing methods. What they have created is a series of showcase ales that any master brewer from the north would be proud of.

Amber in colour, with fresh, earthy notes, Espiga is a medium-sweet beer that’s brewed and bottled just outside Barcelona. Just like the city, Espiga beer are said to be filled with character, personality and attitude.

Brewed by Damn, also in Barcelona, Inedit is a fine-looking bottle of beer. It was created by those connoisseurs of taste at the world famous el Bulli restaurant, and is rated accordingly highly by any beer aficionados who can get hold of a bottle. Inedit is a slightly cloudy brew with a sweet yet potent flavour of herbs, orange and liquorice. Creamy in texture, this pricey beer has a floral nose that that is said to leave the impression of sweet spices.

Good to know: the word “inedit” means “never been done before” in Catalan.

We couldn’t leave a lager off the list of top Spanish beers, so let us present to you this Galician gem, brewed by the Hijos de Rivera in the far northwest of Spain near the rugged Atlantic coast. “Estrella Galicia” means “Star of Galicia” and 1906 commemorates the year the brewery made its first beer.

This malty lager is brewed with barley and maize and has a finish reminiscent of toffee, flowers and herbs. It’s a light and pleasant beer, best drunk deeply chilled and under a hot Spanish sun.

So, the next time you visit Spain and feel yourself hankering for a glass of ‘proper’ beer, see if you can seek out a few of these gems – you won’t regret it!