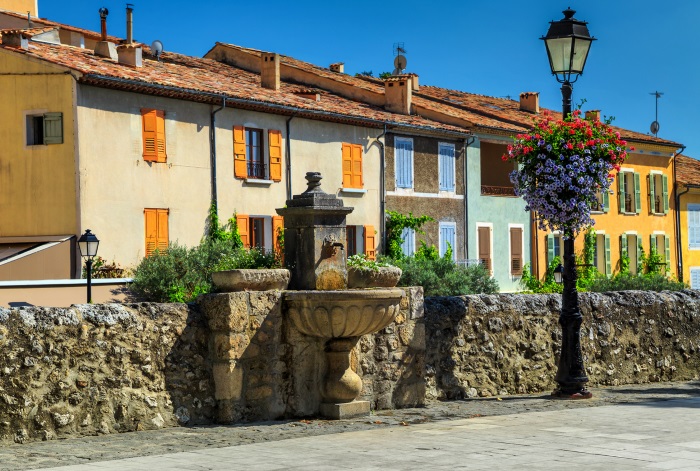 If you’re thinking about purchasing property in France, there are a wide range of properties to choose from.
While some property types are similar to UK residences, there are others that are unique to France.
We’ll be taking a sweeping look at the different French property options and by the end you’ll know your chateau from your charentaise!

Literally translating as a ‘foot on the ground’, pied-a-terre is the term used for the first rung on the French property ladder, a flat or apartment.

While a flat in France could be the occupant’s sole residence, the name stems from the use of inner-city apartments as ‘homes away from home’ when the owner lives primarily in the countryside.

This is the French equivalent of a detached bungalow, with most typically having been built in the last 50 years.
Pavillons, most often found in northern France, usually have a cellar as well as a garage.

A general term for a moderately sized rural property in the south of France, particularly in the southeast region of Provence.

A Mas house may be termed ‘rustic’, as the broad Mas definition can include farmhouses.

This is usually a large, stone, rural home found in southern France, between Nouvelle-Aquitaine in the west and Provence in the southeast.

The Bastide is distinguished by its square design and flat, tiled roof. Compared to a Mas, Bastides are often larger and comparatively more elegant.

Translating as the ‘master’s house’, this term is often applied to the nicest house in a village. They’re known for their functional floor plans, with most Maison de Maitres having four rooms on each floor.

Ceilings and windows are often high in this type of house, which adds to the sense of grandeur when stepping into each room.

These buildings are what most commonly springs to mind when one thinks of the French aristocracy – large, freestanding buildings with many windows and a sizable interior courtyard.

They aren’t always massive, but are at any rate France’s grand take on the townhouse.

A form of (usually) long bungalow, this house type is mainly found in the northwestern coastal regions of Normandy and Brittany.

Longeres are typically rectangular in shape but can vary from a bungalow with converted attic to a more rustic open barn layout.

This can refer to a rural house built in the western region of Charente, or one built elsewhere in the style of one of its distinctive homes.

A Charentaise is structurally similar to another rural home, the Bastide, although from an architectural standpoint it is rare to find an archway in a Charentaise.

Visually similar to a UK Tudor house, these are French ‘timbered homes’.

They don’t always have a thatched roof, but exposed timbers on the walls are a must for a home to be called a Maison a Colombage.

Also called a Fermette, this is a French farm. They are often smaller than the average UK farm, but can come with barns and sheds as standard.

These can have less land than might be expected, as surrounding fields may have been sold off previously for developments.

Perhaps the most immediately- recognisable type of French property, a chateau is typically a mansion or castle.
While the popular conception is of something like an English estate, Chateaus can actually be quite enclosed, with some only having a small amount of workable land attached.

The very largest type of French property, a Domaine is the equivalent to an estate in other countries. These typically consist of large, centralised mansions or even castles, surrounded by large swathes of land.
Historically and in the present day, Domaines often have a specific purpose, whether it’s producing wine, playing golf or hunting for game.

A very broad term for a modern home, this could be anything from a small home to a rural mansion.
The basic definition is that the house has been built more recently than traditional French homes – so a huge range of property types come under this description!

We hope that you’ve found this guide to French properties informative and wish you luck whether you’re searching for a pied a terre or a domaine!