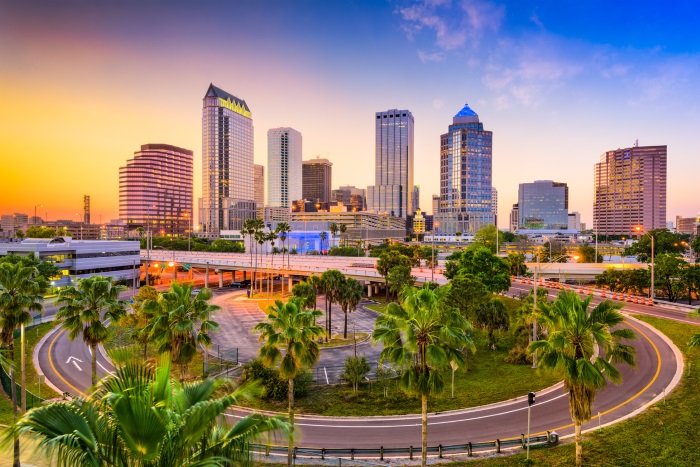 Tampa’s property market is sizzling hot, even in the depths of winter. Named as one of the top spots to watch by Trulia (www.trulia.com) at the end of last year, it is now zooming up the “Hottest Markets” list compiled by www.realtor.com. This index is dominated by sunny Californian municipalities which currently take eight out of the top ten places. But Tampa has shot up five places in the last month, now reaching No 18.

This west Florida bayside city has plenty to offer sun-seeking second-homers, expats and silver-haired “Snowbirds”. The summer heat is tempered by breezes off the Gulf of Mexico and winters are sweet and mild. Florida has great transport links, with cheap and plentiful flights to Orlando, while beaches in the Tampa Bay district are considered some of the best in the state.

Average prices usually reach their lowest point each January. This year, however, the current Floridan median of $250,000 is the same as December and about 10% higher than this time last year. House price growth in Tampa last year was among the highest in the country, up 12% year-on-year. Overall, US house prices rose 6.8%.

Zillow’s (www.zillow.com) chief economist, Svenja Gudell, said: “Home values ended 2016 growing at their fastest pace of the year, which could be an indication of what to expect in 2017.”

Realtor.com’s chief economist, Jonathan Smoke, said: “We saw evidence of a stronger than normal off season starting last September, due to pent up demand and surging interest from first-time buyers. The downside to this strong off-season is that we have started 2017 with a new low volume of available homes for sale and a new high for prices.”

Apart from the weather, Florida is appealing for other reasons, too. There is no state income tax, for one. Unemployment across the state has fallen slightly, down 0.2% since this time last year, standing at 4.8%. The Tampa Bay area fared even better, down to 4.5%, thanks to 28,400 new jobs being created. Most of these were in the construction industry.

Brad Hunter, the chief economist for the online marketplace HomeAdvisor (www.homeadvisor.com), said: “The Bay area has been extremely strong during this economic recovery. What’s been supportive is higher prices in the Northeast and Midwest. People have been able to sell their homes up there and move down here.”

If heat is what you’re looking for, you can be sure that Tampa is hot, in every sense.