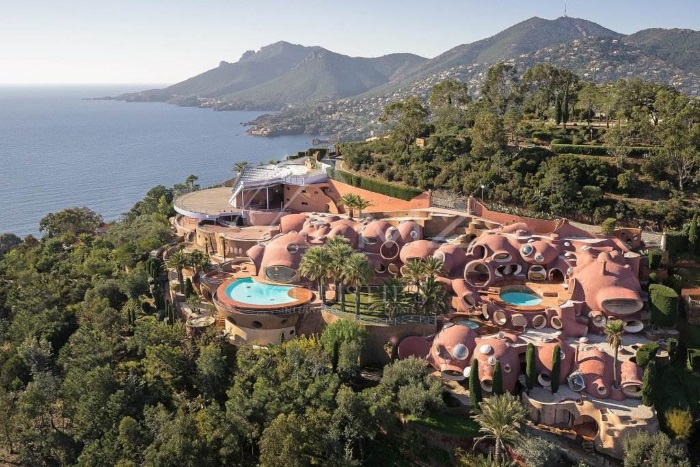 If you saw this property from space, you might worry you were about to land on Mars rather than Earth. Pierre Cardin’s bubble palace is a Teletubby heaven. Formed of 28 smooth, terracotta-coloured domes of various sizes culminating in an amphitheatre, this French fantasy is on the market for £300m.

The Palais Bulles spreads itself over different levels on a hillside, the earth of which is red, volcanic soil. It is part of a rocky outcrop of the Massif de l’Esterel, and looks out over the Côte d’Azur and the Mediterranean Sea to Cannes. There are 10 bedrooms, three pools and sun-drenched terraces. The amphitheatre, which juts out over the sea, seats 500.

Cardin, who is now 94, has been planning to sell his multi-million pound business empire and this sale is part of that strategy. He said: “I know I will not be there in a few years and business must go on.” He has no children.

The property was designed by Hungarian architect Antti Lovag, for his patron, industrialist Pierre Bernard, in the 1970s but not finished until 1989. Lovag, who abhorred right angles and believed a straight line was an “aggression against nature”, died in 2014, aged 84.

Cardin bought the complex in 1992. A fan of bubbles – he first introduced the world to the bubble dress in 1954 – this was a match made in heaven. The avant-garde Italian fashion designer with a penchant for Space Age fantasy has said that the curves of the house were inspired by the curvy shapes of women. Lovag saw it as part of his theory of habitology, or how humans live in a structure.

The architect had previously built a similar house, Maison Bernard, nearby. This red-domed creation in Théoule sur Mer remains in the family of Pierre Bernard and is now open to the public. (http://fonds-maisonbernard.com/en/visit-the-house/)

Cardin has used his modernistic mansion to host a series of celebrity parties over the years, including the James Bond 40th Birthday celebrations, as well as an annual arts fete and top-notch fashion shows.

Dior hired the property last year for a catwalk show to coincide with Cannes Film Festival. The event was watched by the likes of actresses Dakota Fanning and Zoe Kravitz. The Bubble Palace reportedly costs £8,800 a day to hire. At least that provides an income stream if you do decide to splash out on the £300m modern masterpiece.