Get to grips with the different types of Spanish property 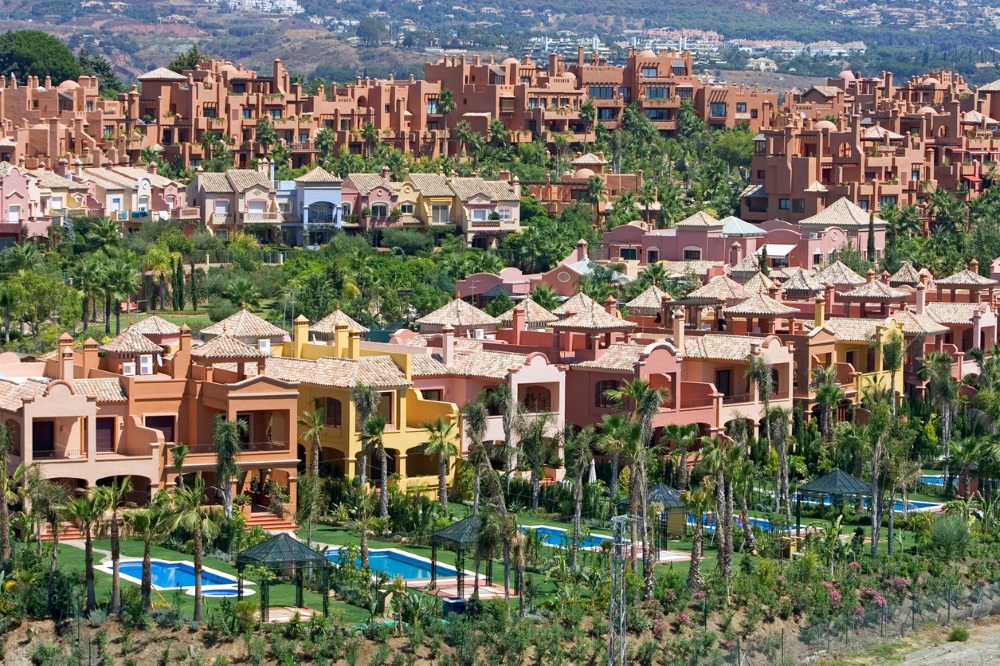 Spain has long been a popular location for overseas property buyers. While the prospect of sunny skies and sandy beaches is one of the main draws for many people, the range of properties available also adds to the country’s appeal.

For those in the research stage of a Spanish property purchase, it can be helpful to know that the nation’s properties are generally split into five main subcategories, with some being more appropriate than others depending on your circumstances. The subcategories are: apartments, country houses, modern semidetached houses, village houses and villas.

Apartments (or in Spanish, ‘apartmento’) are particularly popular with British buyers, particularly those looking to live in towns or cities. You’ll even be able to find apartments near resort locations or ones with communal gardens and pools.

Apartments are typically found along the coast and are becoming more common on golf developments too. They’re a much bigger part of the Spanish property market than flats ever were in Britain, though you (unsurprisingly) won’t find them as much in the countryside.

They’re ideal for a holiday home as they can be positioned in convenient locations and are often much easier to manage than detached or semidetached properties.

There are some downsides to note though. Apartments may not be the best idea for bigger families, children or pets – but that of course depends on the family. It should also be noted that communal spaces often means more noise, especially if the apartments in question have thin walls.

For those looking for a rural abode away from the tourist destinations, country houses and farmhouses are an increasingly viable option for purchase.

In Spanish these are known as cortijos or casas rural. Similar kinds of houses include country mansions (masia) or farmhouses (finca).

While country properties can be cheaper than coastal ones, they’re not always as affordable as you might think. The Spanish countryside is very popular with financially comfortable retirees from Spain as well as the rest of Europe.

For families, retirees and people who like a slower pace of life, a country property in Spain can provide everything they’re looking for from life overseas.

It should be stressed that some properties can be very out in the sticks. Things may feel isolated at times with limited social activities and locals that are less likely to speak your language. Some houses may need to be majorly refurbished, which would require understanding the local utilities and building laws – so a project property will require p.

This kind of property, called ‘casa adosada’ in Spanish, is becoming increasingly popular and as a result more and more of them are being built throughout the nation.

That said, there still isn’t much choice in this growing market and they are still Spain’s rarest property subcategory. They’re typically found in suburbs and are more readily available in the more popular parts of the country.

Many properties of this kind have two floors, a private garden and sometimes even a private swimming pool. They obviously tend to have more space and privacy than apartments, though these benefits can come with a heftier price tag.

Somewhere between a country house and a semidetached house is the village house, or ‘casa de pueblo’.

These have become more popular in recent decades as foreign buyers look elsewhere from the coast or rural areas and towards Spanish villages. However, as you can imagine a lot of these are quite old. They’ll require a lot of work to reform and bring to modern standards (especially things like plumbing and kitchens) like with country homes and farmhouses. Modern conveniences may be lacking too, like heating, air-con or parking – and these things can be pricey to resolve.

On the plus side, however, many village properties will come with a small private garden. Buying a village property also typically means becoming part of village life, engaging with the local community and integrating with locals – ideal if you’re hoping to become proficient in Spanish!

Last but not least we come to villas – the standard idea of a dream Spanish home. Often called a ‘vivienda unifamiliar’ or a ‘chalet’ in Spanish, villas are detached and often come equipped with all the modern conveniences and luxuries you’d want such as air-con, swimming pools, garages and more. These are the most popular type of Spanish property among Brits, but unsurprisingly they tend to be on the pricey side.

They can also be expensive to clean and maintain and may require a lot of maintenance. Those contemplating one as a holiday home should bear in mind that they will need to arrange for someone to check on the property on a regular basis. On top of taking more effort to maintain, villas can also come with higher taxes than smaller properties.

Properties like this are certainly more suited to permanent homes. They’re often in residential developments and can be far from town centres, making it essential to have a car for travel to and from your property. Villas closer to town centres do exist but are even more expensive!

A villa might be your dream Spanish home, but if the price makes owning one unachievable there are plenty of other options open to you. Approach your property search with an open mind and you might find that you end up falling in love with a very different kind of property than you’d anticipated.