Plane crazy: buy a crash-pad with a difference 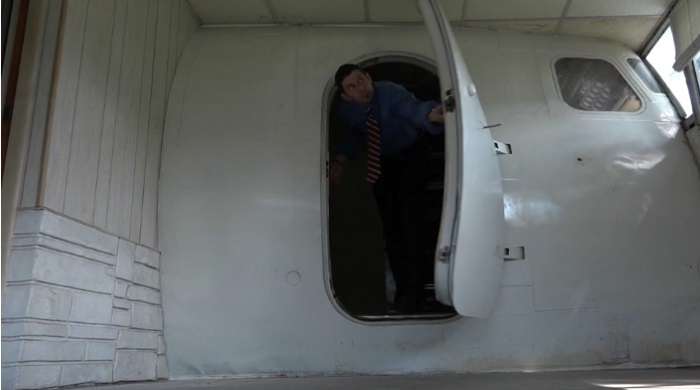 This home for sale in the Florida town of St Petersburg is not what it seems. It may look very ordinary from the outside. It’s a white-painted, single storey property with a double garage and lawns to the front.

Once inside, it has three bedrooms and two bathrooms. So far, so normal. But, wait! Through an anonymous door in the hallway you enter … the cockpit of a DC7. And this is part of a real aeroplane.

Richard Vosburgh bought the unusual addition for his home in the 1970s. The aeroplane, built in 1955, had crash-landed in Tampa, while carrying a pair of Colombian pilots who were trying to smuggle marijuana into the States. The wreckage was sold off and Richard couldn’t resist.

“Dad was kind of eccentric,” says his son, Chuck, who helped his father install the extra room. He spent his childhood playing with the wall of dials. But Chuck didn’t grow up to be a pilot – he grew up to be an estate agent. And, now, he’s selling the house.

“It is the house I grew up in. They brought me from the hospital to this house,” he says. “We held an open house and this place was packed,” says his wife, Pat. “Everybody wanted to see it.”

They received an offer within two days, which Chuck accepted. He’s hoping the new owners will let him visit occasionally to play with his boyhood toy.

Some people have bought whole planes and made a home in them, like living in a caravan. Bruce Campbell in Oregon has recently upsized from a Boeing 727 to a 747. He spends six months of the year living in his plane.

In Malibu, there’s a modernist house that uses aircraft wings as its roof. There’s even a hotel made from a 727 in Costa Rica.

And, of course, there’s the well tried and tested concept of residential air parks, where you can buy a house with its own hangar and taxi out to the runway in the morning to make your commute by plane. There are more than 600 across the USA where the bumper stickers might really read: “My other car’s an airplane”.

But the Vosburgh house seems to be unique. “In all our years of real estate we’ve never heard of another house that had a plane in it,” Chuck says. It’s certainly a crash-pad with a difference.